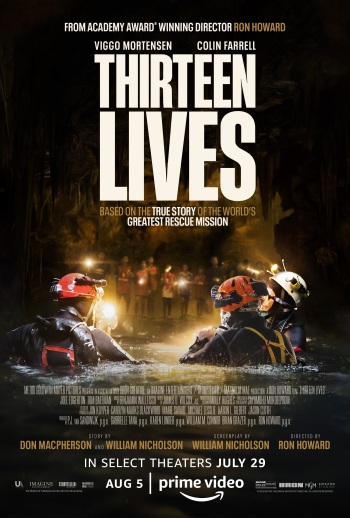 Ron Howard movies are some of the best movies I have ever seen, I knew once I saw that this film was directed by him that I just had to watch it and review it. Honestly, I am glad I did. Now Sadly I don’t remember much about this real-life situation that did happen in Thailand in the summer of 2018. The budget for the film was 55 million and the length of film was 2 hours and 23 minutes. The film starred Viggo Mortensen as Richard Stanton, Colin Farrell as John Volanthen, Joel Edgerton as Richard Harris and Tom Bateman as Chris Jewell. The film was filmed on location in Thailand which had to be cool for the actors to visit the country.

The film starts with the boys practicing football (Soccer in the United States) and everyone is reminded of a birthday that is set at 7 pm because it is one of the player’s birthday, which one player goes straight to the house to help set up everything up. The rest of the team, with the young assistant coach who agrees to take the remaining 12 kids to the Tham Luang Cave to go explore for a little fun. Things go as plan at first but then it begins to rain which through channels at the top of the cave it begins to flood the cave trapping the kids and the coach deep inside the cave. When the team don’t show up for the birthday party that is when the parents alert the police and soon realize they have a bad situation on their hands. As the Royal Thai Navy Seals arrive to dive in the cave to search for the boys, they realize they aren’t able to do it because though they are trained divers for the open sea, they aren’t trained to swim through caves and therefore unable to rescue the team. At this point the governor due to a tip calls upon John Volanthen who also calls his friend Richard Stanton which both are experts in cave diving and recue. They quickly arrive in Thailand and at first no one really wants them there. Nevertheless, they go in and after hours finds the boys who are all alive, they report back and show the proof that everyone is alive, but Richard realizes getting them out is near impossible, Thats when they bring in Richard Harris a doctor both Stanton and Harris know there is only one option to get them out and Harris doesn’t want to do it at first but then finally agrees, the plan is to treat the boys like a package basically tying them up and sedating them, which works but requires three days each day saving four at a time and not one life was lost and the divers and the volunteers who helped divert the rain water from the cave to prevent the cave from getting worse are hailed as heroes.

If you did follow this event on the news than of course you knew the ending but what you didn’t know is what the people had to go through to get them out and that is what kept, you hooked on this film and made you watch every minute of it. Howard did an amazing job at telling their stories and keeping you engaged in the film. This film didn’t have any big action scenes or monsters because it didn’t need to, the writing was on the wall. The actors did a good job at making you feel their pain and frustrations that they had to go through. You didn’t need a lot of character development because the story was the rescue itself. I believe this is another hit for Howard and I love it to be honest and, in the end, I am giving it an S for a grade this was the perfect film in my eyes