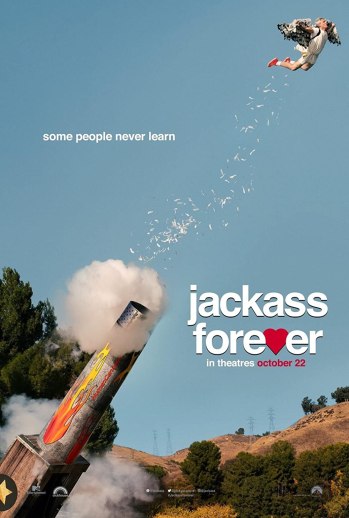 It has been 12 long years since the last film in this series, castmates have gotten order and had moved on and it hasn’t been the same since Ryan Dunn passed away. Just looking at Bam who once was a star and now got kicked out of the franchise that made him a star. From time to time I think we all would decide to turn on a jackass film regardless of it being 1,2 or even 3. There were talks of part four right after three came out. Jackass 4ever had just a budget of 10 million and managed to make 80 million, which makes it the second lowest only to the very first film. This film also introduces to the new cast members or as I like to call them the next generation. Here we have new members Sean “Poopies” Mclnerney, Zach Holmes, Jasper Dolphin, Eric Manaka and Rachel Wolfson. you add them to the original stars minus Bam and of course Dunn and you think you would have something special.

Now usually here is where we usually talk about the plot but there isn’t a plot. The movie is just full of pranks and stunts and celebrities that are fans of the franchise joining for some of the stunts, that’s the simple part but how can we judge this film? Easy by the stunts themselves and the cast. It made sense to have new cast members come in since the old crew were no doubt old and moved on with their lives, But the problem was this felt way too random. I can see maybe introducing a new cast for third film and having them get the torch for this film. Or even doing the show Jackass again first to introduce them. Instead, they are thrown at us and that is it. The stunts are what makes a Jackass film basically a Jackass film but here it seemed like they took a step back with the stunts and that to me hurt the film, now I understand there will be a 4.5 film because they did say they had filmed so much material but maybe that material should have been added to this film. As for the old cast, well no doubt this film was a passing of the torch kind of deal and given their ages the stunts and pranks were weaker than before minus Johnny Knoxville’s stunt with the bull which this time around ended poorly for him because he had suffered some major injuries which pretty much ends his career. The best stunt of the film was the cup test which Danger Ehren had to perform and suffered a rupture in his right testicle.

I am not saying this film was the worse of the bunch but no doubt that this film took a step back but with a younger cast now and maybe add a few more members this franchise can move into the next generation, how do I rate this film? Well, I have to give it an C or just call it an average film in the franchise. I will say knowing that there is a younger cast makes wonder what the future will bring but we have to see what happens next. We do know now that a new Jackass series is coming, that was announced just two days ago on May 3rd and it will be on paramount+