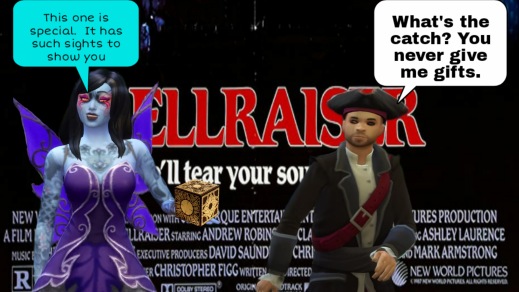 This has been an interesting few months for Pinhead. Being introduced into Dead By Daylight as a playable killer. Then the other day it came out that Jaime Clayton will be taking on the role of Pinhead in the next movie. While I am very excited to see what comes from that. What better time to look back on the first. It’s spooky season and 13th. Hellraiser certainly fits the bill of a classic, so lets do it. Lets dive back and discuss shall we.

The movie kicks off with Frank buying the box from a merchant. Taking it back home where he works on solving it, kneeling in a square of candles. When a chain leaps out and snags him. We start to pan from room to room and when we return, find the room covered in chains and a totem covered in flesh. Seeing a woman cenobite putting his face together like a puzzle, while Pinhead closes the box and everything disappears. We jump to Frank’s Brother Larry and wife Julia coming into the house. Discussing the potential of moving in. Frank being gone and Larry doesn’t really care about it. An idea Julia does not seem sold on the idea. When he goes off to answer the phone, a call from his Daughter Kristy, who tells him found a room. She goes through Franks stuff and sneaks a photo. Before agreeing to move and they start on Sunday. We meet Kristy during moving day. While Julia is upstairs. Having a flashback to first meeting Frank and the affair she had with him. Brought out of it by Larry coming in. Bleeding from a nail cutting him. Needing her help since he can’t handle the sight of blood. Dripping blood on the floor that starts to absorb into the floor. When her and Kirsty take him to the hospital. The floor boards begin to shake and gore pile form and Frank comes out. Only, a shell of himself. Missing skin and flesh and just a bunch more. Later that night, when Julia leaves the Dinner Party early. Hears noises coming from the room and finds him. She tried to escape, but he stopped her. Asking for her help. The blood brought him back and he needed more blood to put himself back together. After remembering their time together. She comes back and tells him she will do it. We see her go out and pick up a guy from the bar. Bringing him back and killing him with a hammer. Allowing Frank to suck him dry, but he needs one of two more, and needs the quickly, before the Cenobites come for him. After the second, he explains the box opens the door for the Cenobites. Who bring pain and pleasure. That night she has to do everything to get Larry from going into the room. Then beg Frank to not kill Larry. When he gives her a choice. Get another or he is killing Larry. So, she goes out again, and brings a third. Which Kirsty sees her bring home. Since Larry asked asked her to go talk to Julia and see what is wrong with her. Rushing in when she hears the scream and is attacked and trapped in the room with Frank. Using the box to distract him and chucks it out of the window and escapes. Grabbing the box along the way. Getting far away but the trauma and everything getting to her and she passed out. Waking up in a hospital bed. Not letting her out of bed and even locked her in. She turned her attention to the box. Starting to solve it. Opening a doorway. Going inside and immediately chased out by a monster. She tries to close the box and the cenobites arrive. Going to take her away when she says Frank is alive. Reaching a deal. Have Frank confess himself and maybe they will let her go and that is where I ill stop for now.

The gore and carnage candy was fantastic through. The practical effects on Frank rising from the gore pile and all the work they did with the chain cutting into him. The final look of Frank being held in place with all the chains and ripping him apart. This movie needed depending on the gore and they delivered big time.

On those same lines, the prosthetics and costumes were tremendous. All the stages of Frank looked wonderful. The Engineer was great and then there are the Cenobites. All having their distinctive look and personality that spoke through their look. Pinhead is legendary. Chatterer and Butterball were really cool and interesting designs. While I always found the Female Cenobite to be the most unnerving of the bunch. The needles and contraption opening up her throat. Way she spoke and small motions spoke volumes and worked perfectly.

For the most part, the movie was perfectly paced. Building to a wild finish. A really creative dark, twisted story. Of the punishment and chaos that is housed inside the box. Giving you just enough to entertain in the blood soaked violence and intrigue to not only entertain, but open enough to let your mind wonder about the mystery behind it and what more could be inside the box.

The picked up an amazing group of actors and actresses to bring the characters to life. Each of the Cenobites were excellent. Doug Bradley came out like a star, for Pinhead, but the others were equally awesome, with Grace Kirby as the Female Open/Deep Throat, Nicholas Vincent as Chatterer, and Simon Bamford as Butterball. Claire Higgins pulled off Julia’s descent into madness and turn to a villain nicely. Same with Andrew being nice guy Larry to Frank in disguise by the end. Oliver Smith as skinless Frank brought a terrifying presence to the performance. Last, but furthest from least is Ashley Laurence as Kirsty. Turning in a master class and staked her name as among the best Final Girls in horror.

While, I have no out right negatives about this one. I do have some mixed and it surrounds the dream and the homeless man. I did praise them about keeping enough to the chest, but these two things could have used a bit more time. Think she had one dream and homeless man followed her about, eating crickets at the pet store. He was the way to get the box back to the merchant of course, but a little more would have been nice. None of which is going to put much of a dent into what I thought about the movie though.

If you haven’t watched it. Now, is the best time to change that. Fantastic, brutal horror film that is the personification of an all time classic. Legendary characters brought to life by great performances. Fit for any Halloween Marathons. Final Grade – A+

Thank You For Reading!