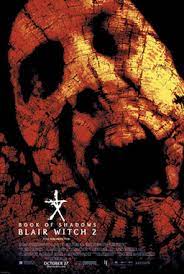 I have been wanting to review this film for so long now because overall I do like this film franchise and do for the most part enjoy the found footage style when it is done right, tough Justin mocks it, well that is another story for another day. When I was kid, I didn’t know that The Blair Witch Project was fake because the found footage style of films were so new to me in fact the Blair Witch Project was the first found footage movie that I have ever watched. The Blair Witch Project was a big time hit, the film was produced on a budget of 500,000 dollars and took only 8 days to film. Now the film made 248.6 million dollars, pretty good numbers I would say but also we know that a sequel would come but how fast? Very fast would be the answer, basically 15 months later we got a sequel and it wasn’t what we were expecting. They decided to go away from the found footage style to a more of dramatization story telling approach or metafiction. I wasn’t a fan of this changed but I didn’t hate it either. The film was produced on a 15 million dollar budget but only made 47.7 million dollars, which was still a hit but nothing compared to the first film. Filming took only 44 days and everything was being fast tracked. This was because Artisan wanted to get a sequel out well the buzz was still going on, which is tactic that hardly ever works. They should have let the buzz die down then take time off and make a better sequel. The cast was led by Jeffery Donovan but also starred Erica Leerhsen, Stephen Barker Turner and as well as Kim Director and now let’s check out the plot.

The story takes place in November of 1999, just a few months after the first film was released and tourist and fans of the film come to Maryland to see if the events of the film actually did take place. In all of this Jeffery, who is an obsess fan and was just released from the psychiatric hospital decides to put a tour group together to make money. Once he has his first group together they begin going in the woods and each member of the group has their own reasons for wanting to see this location. As the night goes on supernatural events start to happen forcing the group to go to Jeffery’s loft where slowly but surely everyone starts to argue with each other. Everything leads to one of the members dying and the rest being arrested for the crime though they plead their innocents and tell their stories, the tapes in Jeffery’s house tells a much different story and shows them killing the member and other videos shows the other members killing people and hiding bodies as well, which makes them wonder what was real and what was all in the their heads. The film ends with mourners visiting the woods to mourn the deaths of all those people who lost their lives because of the Blair witch.

Now I don’t think this was the best follow up to a hit film and I can see rushing this film was just a bad idea. Good things do take time and that’s the advice they should have taken with this film. The casting, I was okay with but the characters I had a problem with because you a goth, a crazy person, a want to be witch and researchers and yet this was random. It just felt out of place to me. heck I was okay with the story as well it made sense to see how this film change the little town. In the end I am giving this film a B or 80 percent for a rating. If some things would be different and the overall product was better than the grade would be higher!