The Conjuring 3 The Devil Made Me Do It Movie Review 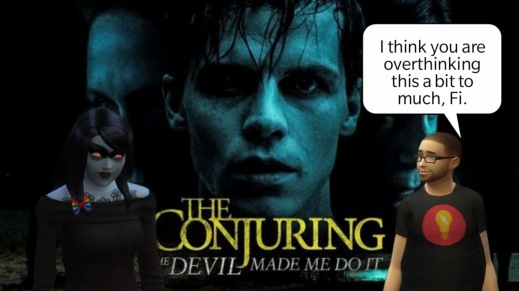 So, I am relatively new to the Conjuring Universe. Me and Paulie making our way through the series over on the YouTube Channel, but no reason to gloss over the newest entry on here. For those who haven’t seen them, I have not been very high on these movies so far. My favorite has been the second one, but I am stretching pretty hard to say that was enjoyable. I know, the bar is pretty low to make an enjoyable movie for me, but The Conjuring and the spinoffs I have gotten to, haven’t met it, but the beat goes on and I go into The Devil Made Me Do It, with hopes that it will turn the ship around for me. Lets dive in and discuss shall we.

The movie kicks off at the Glatzel House, that has been torn asunder. Family consoling their young son David and taking him to bed. Ed and Lorraine explaining that the Exorcism has been approved by The Church. Upstairs we see David getting trapped in the Bathroom by something and Father Gordon arrives. Rushing up the stairs at the sound coming from his room and have top bust down the door. The demon is in full control of David and stabs his Dad with a shard of broken glass and Ed decides the Exorcism has to happen now. Which goes about as well as expected. The Priest gets taken out by a flying dish and the demon triggers a heart attack in Ed, Lorraine distracted by psychic images, when Arnie tells the demon to take him instead and the demon jumps bodies and it all goes quite. Only one who sees it happen is Ed, who blacks out. Rushing Ed to the hospital and everyone believes that it is over. The next day he starts getting sick and hallucinating. Ed finally wakes up the next, telling Lorraine to warn them, but it is to late. Arnie hallucinated that Bruno was a monster and killed him. Cops finding him wondering down the road covered in blood with no memory of what happened. The Warrens manage to persuade the Defense Attorney to go for not guilty due to demonic possession. Warning them that the prosecution is seeking the Death Penalty and it is up to them to try and figure out how they could possibly prove Demonic Possession and this is where I will leave it for now.

This movie comes close to not really being worth talking about. Nothing about it was really any good. Every movie has got plot holes and will go out onto the thinnest of ledges, buy when the questions start piling up at the start of the movie and don’t stop. It is hard to look past them. There was no reason for Lorraine and Priest to believe that the exorcism worked. No one finished it, since The Priest got knocked out and Ed went down. Arnie not speaking up after everything he saw was next level dumb. Not to mention, didn’t make much sense in the fact the the demon was being controlled. He was there for the kid and the trashing talking wasn’t really anything since the demon was wiping everyone out.

Which was kind of the point of the Ritual. The demon kills and and commits suicide. You can make the argument that the person has to take their own life, but the women took control of Arnie at the hospital to cut his wrists. So, the demon could have killed someone at the Exorcism and had killed himself while in control of David or just commit suicide as Arnie after he killed Bruno.

Not to mention Occultist’s plan didn’t make much sense. Things just happened and she made it up as she went along, but she wasn’t dumb, and knew that her soul was on the line here, but look at her plan. She needed a child, lover, and man of God. If Jessica and Katie was the child, wouldn’t make sense to go after David and would have just gone straight to Arnie, and she more or less picked Ed because Lorraine Psychically gate crashed her lair and just ran with it. If they had focused more and had her be smart with real plan and actual chosen victims that the Warrens had to race to save, would have been better for it.

I got more, but lets push on to the mixed. Patrick Wilson and Vera Farmiga were pretty good as Ed and Lorraine. This wasn’t their best outing, that would be the second one, but it wasn’t on them. They tried their best with what they had and are good as the characters.

I did find a positive. It was a struggle, but I did. At least it wasn’t a court room drama. Which would have been both dull and kind of a bad look for them since the Demon thing didn’t stick long. The Judge refused to hear it, si made sense to stay away from that with the movie.

That is all I got. Shorter review than normal, but I want to say, if you enjoyed this movie, I am happy for you. You enjoy what you enjoy, but this movie is down there with the Nun for worse in the series. Sure won’t be recommending it to anyone, and while I was still very nice with the grades when it came to the first two conjuring movies, those at least had something to sink your teeth into, while this had nothing. Son, Final Grade: D

Thank You For Reading!