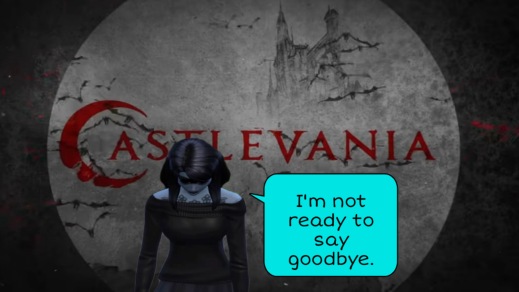 Well, I am certainly not ready to say goodbye. As much as I wasn’t ready to say goodbye to Supernatural last year. It is even more so now. It doesn’t feel like we have had enough time to have this show. Feels like not that long ago, when it clawed its way into my heart in blood soaked monsters and excellent character work. So, much more I want to see. Adventures I want to see them go on, but time to stop putting it off. With a heavy heart, lets talk about the final season.

Normally, I would break down the start of the show and trail off, but with so many parts, we will stick to what everyone is doing throughout and it makes all the sense in the world to start with Belmont and Sypha. Who kicks things off with a time lapse of the past six weeks. Showing them having constant fights with monsters, some of which are trying to resurrect Dracula or appease Death itself to bring him back. Worn out and taking its toil on them. Their trail leading them back to where it all began, Targoviste. A place where survivors are struggling to survive, a Royal Guard named Zamfir, who claims that the Royal Family is still alive, in an underground stronghold, but won’t take them back till she trusts them. Leaving them to wonder what is going on and why the monsters are still gathering in the ruined village. Who are being lead by Varney and Ratko. Varney, a loud mouth, who was an original member of Dracula’s Court, who will not let you forget about how important he is. Wanting to bring back Dracula, and is working with several others, such as Saint Germain. Who returned six weeks prior, after failing to find his love in the Infinite Corridor. Due to not being able to control the flow. Running into an Alchemist. Who tells him what to do. He needs to make something called a Rebis. Something that requires him to combine two souls into one, which requires sacrifice, and he chooses that to be the people of Danesti A town that has reached out to Alucard for help tp fend off the monsters. Who has been busy adding bodies to his collection in his front yard. Who agrees after a speech from the headwoman, Greta. Agreeing it would be safer to defend them at his castle, after a suggestion from Saint Germain. Being told he needed the exact spot he died, from his other partner, Hector. Who is still ensnared by Lenore, but can’t build them a night creature army, till he crafts a new hammer which he is stalling on. Which builds up tension between Carmilla who sees through this, but Lenore believes in her spell, but also, is becoming disillusioned by this plan. Seeing her rule as a Diplomat being wiped out by where this all leads, and it isn’t just her, but Morana and Striga, who are out in the battlefield, are feeling it too. Especially after a group of villagers tried in vain to fight back. Striga deals with it, but sees it first hand. That this will never be over. She would be constantly fighting and never see Morana. Little did they know, Carmilla has been working on a plan far greater than they thought. She is making plans to take the world. Then, there is Isaac. Who is starting to go through a change. Still wanting to lead the charge against Carmilla, but thinking about what kind of world he will leave behind. Having his night creatures rebuilding the village and burying the deceased he can’t reanimate as he thinks it over and that is where I will leave it for now.

I am going to miss how well they treat characters. From how good they are at building up new characters like, Zamfir, who you feel so much for. That she couldn’t handle the pain of what happened. Scarred by what she saw that day and couldn’t face the fact that the Royals were gone and was grasping at whatever straws she had and was sad to see her die. Varney was built perfectly. Loudmouth that you wanted to see get their comeuppance. Hiding the twist perfectly. Had characters like Morana and Striga getting fulfilling story, along with an awesome fight scene with Striga sporting Day Armor. Had characters like Isaac, whop had a compelling story of him growing as an individual. Letting go of his rage and finding purpose in his life. Alucard finding a place in his world, and even the villagers are doing stuff in the background. Fighting back, being more than just cannon fodder. Warren Elis and all the writers did a fantastic job on the show, and the final season was no exception.

Titus Welliver did wonderful as the menacing, powerhouse Ratko. Toks Olagundoye breathed so much life into Zamfir. Marsha Thomason and Christine Adams were spot on as Greta and The Alchemist, and of course Malcom McDowell as both Varney and Death. Who did them both justice. Made Varney the despicable worm that you wanted to see smashed and the gravity and boss level threat Death is. It goes without saying that they likes of Richard Armitage. Alejandra Reynoso, and James Callis killed it as the voice acting for Belmont, Sypha and Alucard. Adetokumboh M’Cormack id great as Isaac. Along with the likes of Bill Nighy, Jessica Brown Findlay, Yasmine Al Massri, Ivana Milicevic and Jaime Murray all returning as Saint Germain, Lenore, Morana, Striga and Carmilla who knocked it out of the park and so many more who made this show awesome.

The art style and animation all looked great. From beautiful shots of scenery and backdrops, to the bloody and gore. The fights scenes were tremendous and well done. Especially, toward the end. When the fighting started and the gradual intensity of all of all of the fights, until the gorgeous fight between the fight between Belmont and Death.

Now, lets talk about the ending and what a wild ending it was. It was a twist when Varney revealed himself as the Alchemist and mind blowing when they revealed to be Death all this time. Just throwing everything about what I thought was happening up in the air and I loved it. Played to perfection and came out of nowhere. Just perfect. I didn’t mind the fact they kept Belmont alive. Wanted to see a happy ending for them, and if they weren’t killing Hector, they can’t take Belmont. Having the scene outside the castle, where they were going to build a new village felt like the right end. Where people can rebuild and move on from here.

A bit of a mixed one, is that I think we could have got a bit more with Carmilla. I liked the story they got, but feel they could have had a bit more love to it. Even just a scene of two with Carmilla, Lenore, and Hector to help build the tension between them.

One negative, the last few minutes should not have been with the resurrected Dracula and Lisa. First, they really didn’t need to be brought back and really didn’t do anything for me that they were. They should have cut to black with the main group outside of the castle.

And that brings us to the end of the review. Still not ready to say goodbye. Season 4, the final season, delivered an amazing finale for a show that I love. They gave each character a fitting ending, from major to minor, and had some great animations, performances. Carnage candy and fun fight scenes. Everything one would think when going into a show called Castlevania. Final Grade – S