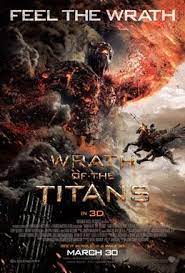 As always everyone knows how much I love Greek mythology and every time I come across a film that involves that I must watch it and see how close it is to the source material. However often these films go so far away from the material, the only thing that is left is basically the names. Enter 2010 we see the release of a film called Clash of the titans starring Sam Worthington who at this point was just beginning to reach the peak of his career. In 2009 he was a lead in the fourth Terminator movie and the lead in Avatar. The Clash of the Titans added to his resume with being in blockbusters. the film was produced on 125 million dollar budget and grossed 493 million making the movie a success despite being poorly reviewed. However money talks and just 2 years later we got a sequel titled Wrath of the Titans. The film brought back most of the main cast so the film starred Sam Worthington as Perseus, Liam Neeson as Zeus and Ralph Fiennes as Hades. Once again this film had slightly reviews but still negative much like the first film. This film cost more to make which it had a budget of 150 million and grossed just 302 million which was nearly 200 million then the first film. though it made money a third film was planned called Revenge of the Titans though that idea was cancelled. Now it =s our time to see how bad or good this film was and like always we are looking into the plot first.

This film takes place ten years after the events of the first film, Perseus now resides as a fisherman again with his son Helius, we learn that Lo passed away sometime before the film. One night Zeus visits Perseus and warns him that the mortals are no longer praying to the gods as a result the gods themselves are turning into mortals and with them losing the their powers, they can’t maintain the walls of Tartarus which if they crumble Kronos will be free from his prison and wreck havoc on the earth. Perseus reminds Zeus that he is a fisherman now just wants to enjoy time with his son. Some days later Zeus meets up with his brothers Hades and Poseidon and his son Aries to form a plan to fix the issue but Hades and Aries have other plans and defeat Zeus and barely killing Poseidon who escapes from them. Poseidon comes across Perseus and tells him what is going on, which now forces him to join the fight. But this fight will require him to team with his cousin to gather all three weapons of the head gods to defeat Kronos and save Zeus but Zeus’s time is coming to an end because his powers are nearly drained and Kronos is now free but after a hard fought battle Perseus saves the day but Zeus dies from his wounds. Hades who is now mortal leaves the scene in defeat and sadden that he lost his brother. Perseus reunited son Helius and even scores a kiss with Andromeda. Helius tells his father that he wants to go home and be a fisherman and Perseus tells him they can’t and he must be proud of who they are for Helius is the son of Perseus and the Grandson of Zeus.

Like many action films the story isn’t really there nor does it make sense. Zeus created the mortals so he doesn’t get his power from them. Next they could have made Zeus more of a badass and considering the actor they had for the role this was a big time hit. Next Perseus telling his son in the end they can’t go home to be fisherman doesn’t make sense because Perseus did that once already and of course the death of Lo who lived hundreds of years before Perseus was even born. The action was average at best so was the affects they used. But I know why the third film was cancelled because the series was trending downwards big time. In the end I am giving it a C or 70 percent for a rating this film in the end was nothing more then a film that will get lost in film history.