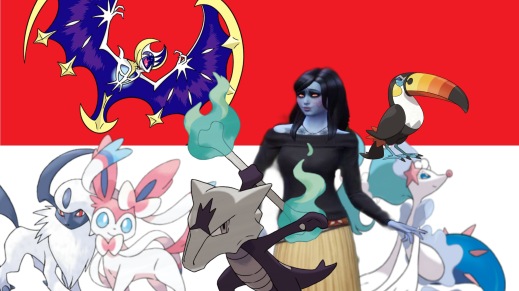 As we inch closer to the end of the series, we arrive at the Seventh Generation, with Pokemon Moon. Going in I knew just a handful of things about Moon. Knew there was islands and that they replaced gyms with trails and added something called Z Moves and that was about it. While X was a fine game, thought they left a lot of places to grow on and was excited to see which way they went in Pokemon Moon. An unexpected change actually happened because of the Islands. Normally I would add a Pokemon or two as I go. Slowly building a team, but in this game, I really went in a different direction and staggered my team. Mixing and matching as I went till I had a team I liked. So, instead of telling who I had at what time. Just tell you how I had when I left each island. So, lets dive into Mui’s next chapter in the Genwunner series shall we.

The game kicks us off with a chase scene of a little girl being chased around a facility by guards. When something in her bag teleports them to safety after being surrounded. Before we catch up to Mui and her first day on a beautiful night on Melemele Island. Professor Kuki comes around and takes us to meet the Island Kahuna. Which turns into us having to go find someone we never met before. When we bump into Lillie, the girl from the beginning and we save her Nebby, Cosmog, from a group of Spearow and leads us to being saved by Island Guardian Tapu Koku. Leaving a stone for us when he departs. Leading them back, meeting the nightmare known as Hau, we get to pick our pokemon. Which is a change from before the pokemon has to chose us to, but in the end, Kristen the Popplio is on the team. Getting our Z – Ring and Rolodex, and off to training school. After dealing with that and a regrettable first encounter with Team Skull. Finally slog our way to the first Trial. Were we chase Alolan Rattatas and fight Skulls till we Trigger the Totem Pokemon, an Alolan Raticate. Earning our first Z-Crystal. Which I took back and beat Kahuna Hala, with Kristen, Tree the Pikipie and Nacy the Alolan Grimer. Allowing me to move on to Akala Island. After a bit of confusion and battling the “edgy” Gladieon, who didn’t like Hau either. After a tough fight with his Null. We finally get to move on to some more Trials, Akala being home to three. First being to fight off some Wishiwashies. Getting 10 dive balls that I will never use. Two was a huge let down revolving around dancing Marowak and photos, but loved the third. Where we had to collect ingredients to make some food to tempt the Totem Pokemon out of hiding. Along the way we stop off at the Battle Royale, where we meet the Masked Royal and have an interesting 4 way fight and have to fight Pulmeria of Team Skull. Battling the Island Kahuna Olivia, with a team of Kristen, Tree, Sally the Sylveon, Sydney the Marowak and Alexandra the Phanthump. After we are rushed off to the Aether Institute. A place to protect and house abandoned or Pokemon in need. Lillie refuses to go, leaving me alone with Hau. Meet Lusimine, whose goal is to find an Ultra Beast and one appears, but leaves just as fast. They gave us a lift to the next island. Going to meet Kuki at the park and see not just him, but Guzma, the leader of Team Skull and the fight ensues and the fight with Team Skull continues at the Aether House after we leave the Park. While I was out taking pictures of Ghosts and fighting the Totem. They circle back and steal someone’s Pokemon. Leaving a message that we have to go alone to get it back. Which we did, but learn that Team Skull consists of people who have failed their own Trails along the way. This, of course, was a distraction, and Team Skull kidnap Lillie and Nebby. I want to just go and get them, but we have to fight the Kahuna, Nanu. With our team of Kristen, Tree, Sally, Sydney, Jaime the Panchum, and Minxie the Absol. ( I think. I forgot to note down when Absol made the team, but I believe she was added before this) Despite our best efforts and learn that Gladioen and Lillie are siblings to an awful mother Lusimine. She uses Nebby to open a wormhole and her and Guzma are sucked in and Nebby evolves. Leaving me and Lillie to go collect flutes. Which should help. Not before I fight Hapu, newly elected Kahuna. After playing the flutes, Nebby evolves again into Lunala and we enter the portal. Having to battle Lusaminie after she merges with an Ultra Beast, the Beast Mother, in a boss fight. Which was grueling. After, Lillie asks us to catch Nebby, which we do, and we drop Jaime from the team. Team going into the Elite four, is Kristen, Tree, Sydney, Sally, Minxie, and Nebby. The Elite four was nothing special, but Kuki ended up being a bit of a fight due to his snorlax, but third time is a charm, and the celebration began and we caught Tapu Koko. The post Game kicks off with a sad goodbye to Lillie, who is on her way to Kanto. To find help for her Mother, in Bill. Post Game has plenty but after Catching the Ultra Beasts, I was ready to move on and Mui retried back home.

Pokemon Moon did so much right. I’ll start with the story. Which I didn’t think much off at first. I button mashed my way through a lot of the start, thinking it was just the usual quick stop tutorials, but as we went along. I found myself getting into it. I really liked seeing Lillie grow as a person. Going from someone who was scared and sheltered and watched her grow into her own person and she wasn’t a trainer. Which I liked a lot. When we ran into her she was there to talk and not challenge me and ramble about fighting me again. Team Skull got on my nerves, with the worst form of cringe, the moment they would approach me, but they were made almost deeper when you learn that they were trainers who couldn’t complete their trails and and came together and acting out because of their failures.

Really upped the graphics from X. The movements feel more smooth and loved the addition of the Z moves. Which looked amazing and loved the idea of this one time, all out powerful blow. Loved the designs of the Pokemon they added and the Alolan Pokemon ranked from awesome in Marowak to nice with Alolan Persian. Was amped up to see the Ultra Beasts, cause I avoided looking at them a head of time and the designs all hit the mark for me and the idea that your starter pokemon had to pick you too. Kind of wish that they would build on that idea and of course, the ride pager was spectacular. Loved running around on a Taurus.

The mix up from Gyms to Trails was a welcomed addition. Really fitting the Alolan atmosphere. I wasn’t a fan of the Marowak one. Thinking they could have done more with that, but I loved the idea of not only having to fight Totem Pokemon but find ways to lure them out. Whether it is making food or taking Pictures of ghosts to make Mimikyu want to come out for a picture. At the some time, battling was important and had to earn the right to fight the Kahuna.

One quick mixed feeling was the layout of the Islands. Got lost so many times and Island hoping felt weird and hard to backtrack for something specific. Not counting it as a straight negative because I’m fairly certain that it is on me. Just weird.

On to the negative and his name is Hau. Living Breathing nightmare known as Hau. Never wanted to beat a character more in a pokemon game more than Hau. We have been having this friendly rivalry for a few gens now, but this is the worst. Seriously, wanted Barry back and never missed Blue more. Even give me Silver. There are threats going on and he just keeps going on about the Trails and keeps smiling. At some point his tone needs to change and it doesn’t. Would trade for any rival just to get rid of his stupid smiling face.

They do hold your hand a bit to much. at the start. Button matched my way through some stuff that was probably important and they could have spaced some of this stuff out more. Which could have given you a bit more of freedom to play with. At least feel like it.

On a minor negative, way more personal, I hate the fact they got rid of the Roller Skates. They introduced such a fun way to get around and may never get over them being removed.

And that is all the negatives I got. Really had fun in Moon and loved what they brought to the table. From the designs, the story and Z moves. It did have some negatives, granted, looking at you Hau, but I can look past most of them. Seriously miss the Roller Skates though. Pokemon Moon was a blast to play and would gladly play again. Final Grade – B+

As always, I Hope you enjoyed and….

Thank You For Reading