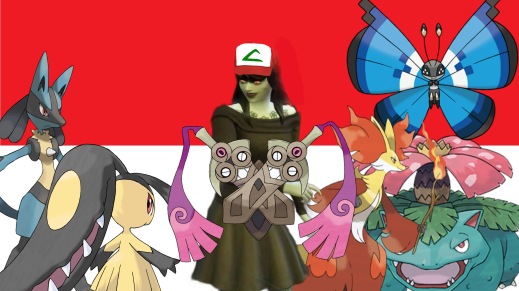 So, this has been a project that got set aside for a bit. Having left off with Soul Silver back in December. Knew it was going to take a bit to circle back, but took me a bit longer than even I was expecting, but I am glad to be back to it. Enjoying myself more than I thought I would and looked forward to X in particular. There move to 3ds and a jump from 2d sprites. Curious to see how they would change with it. So, with that said, lets jump in and talk bout Mui’s journey through and my thoughts.

Mui’s journey kicks off in Vanivelle Town. Daughter of a former Rhyhorn Racer and Professor Sycamore has called upon the five kids from town. Meeting up with them one town over, Shauna, who wants to make memories with her friends. Trevor, wants to fill Pokedex. Tierno, the dancer and Calem, Mui’s rival who you will grow to despise. Mui’s first act was declaring herself as Lady M… and took Fennekin and named her Asuka. Joined shortly after by Io, the Scatterbug. Working our way toward Santalune City where everything stopped when we got he Roller Skates and spent so much time skating around town. Getting a little to carried away and forgot to heal and lost my first shot at the gym. Got it the next time and went to finally meet the Professor. Meeting us all, and while he wants us to all have our on reason for adventure, really wants to know about Mega Evolution and challenges me to a fight and I get to pick from the original starters. My mind told me to go with Squirtle, but my heart won the day and Bayley the Bulbasaur joined the team. Trying to leave but bumped in Lysandre. The obvious baddie. Retreating a bit, to put off with meeting with Calem, I added a Honedge who I named Abadon, but I eventually went and met Calem. Listening to more of Lysandre’s rant to Diantha and finally got to move on. Becoming a duke and woke a sleeping Snorlax. Finding Maki the Mawile in Glittering Cave and chased off Team Flare. Picking the Jaw Fossil and the second gym badge. Added Hawlucha that I called Lita for a bit, but was short lived. After beating Korrina for her badge and lost the rematch, she won on a one hit crit. I decided to finally run with Lucario after passing twice before and Hirsch was added in place of Lita. Taking care of Flare at the power plant and destroyed Clemont for his stupid quiz. Getting lost trying to find Sycamore and spent a fortune in Cab fair all for a Calem fight and Lysandre rant, I felt cheated. Cleared out the Pokeball factory and stumbled into the Fairy Gym by accident, but wasn’t a problem, my team, may not be over-leveled but still swept her with ease. At the next town everything stopped again. Going to fetch a pokemon for the lonely widow, in the form of a Zigzagoon. Barely escaping another Calem fight after the gym because Lysandre finally went crazy. Threatening to kill everyone not involved with Team Flare. Fighting my way through his knockoff Team Rocket layer. Just to have them activate the Ultimate Weapon anyway. Powered by Legendary Pokemon Xerneas. Which I masterballed, didn’t have the resources or health to widdle him down. Escaping the explosion and went back to the circuit. Where I not only had to deal with Sycamore one time, but fight Shauna, Tiern and Trevor in a fun battle on a rope bridge. Which I had fun with, beacuse these three hadn’t hounded me the whole game for a fight. Asuka dealt with Wulfur with ease and off to the Elite Four. Where Bayley stepped up as MVP. Where she not only sole survived twice, one of which against Malva, to bring home the Championship. Post Game, I caught Mewtwo and Zygarde, which I named Sonya and Shayna. I did a few rounds in the Battle Mansion and traded a Kirlia for Dantha’s Ralts and since Shauna was so nice and didn’t challenge me every other town, traded Xerneas for Chespin, before retiring back home.

We are going to kick off with the pros, and want to start with the obvious and the designs of the pokemon. Which I did really like. Pokemon like Honedge, Skiddo and Hawlucha had some really cool designs and relit my desire to catch as many different pokemon as I could. The introduction to the Fairies not only opened themselves up for some interesting designs but breathed some new life into Pokemon like Mawile who needed some love. Then you got the Mega Evolution. A fun mechanic that while I was fifty fifty on some of the looks, the ones I did like, I loved. Really built up the desire to seek out as many of the stones you could to see them all.

Thought this was a good first step into the world of 3d for them. It could be a bit wonky at times, when you are entering doors or trying to get someone’s attention at times, but felt like it was fine. The scenery looked good and liked the fact they added stuff to design your character and just help try to pull you into the game a bit more. A few of the gym designs, like the one in the city and the Fairy one were knockoffs of ones from Generation 1, but I did like the dollhouse aesthetic. Really loved the spider web and circular dimension in the psychic one and the roller skate rink which brings me to the next one.

I loved the Roller Skates. I was so happy and just skated around for the sake of it. Love roller blading and fact I got to skate around in game was such a blast. It is officially my favorite way to get around and, little hint, I have finished Moon as of this blog, hurts that they got ride of it. Was one of my favorite parts of the game.

To round off the pros, I liked the group dynamic they were trying for. Friends who all had their own desires. Not all trying for the same thing. Liked Shauna just wanting to have fun with her friends and Trevor just wanting fill out the Dex and got a kick out of Tiern just wanting to dance. None of them really wanted to fight but find different objectives, but at the same time they felt incomplete.

This game for all the good they showed, all seemed to leave things incomplete. We could have done more with Tiern and his desire to find dancing pokemon. That could have lead to a fun side mission. Didn’t even try with Trevor. Just reads your pokedex and says you won. That could have been a fun challenge to have in the game. To try and beat him in completing the Pokedex and Calem just got annoying. Friendly rivals don’t work. Pick a lane or don’t try.

Don’t get me wrong. I kind of feel bad for Team Flare. Team Plasma was such a good group, that it would have been difficult for them to have to follow them, but they didn’t even try . They are just there to be in your way and Lysandre feels so hollow. Seeing him die in the end was probably the only interesting thing they do with him because you don’t expect it to happen. But short of that, he falls short and that kind of carries over to Sycamore as well. He is just boring. Wants you to go for Mega Evolutions, but every time just shrugs his shoulders and says or whatever you want. Speak with some conviction, show you care. Only reason he is memorable is because you get a second starter.

Pokemon X almost sits perfectly on the middle. Some good things, some bad things. Had Megas and Roller Skates. Pokemon designs that love to hollow characters and a pest of a friend, but I didn’t hate my time in Kalos. It is an easy playthrough and glad I played and would play again and for those reasons I would give it a grade of B-.