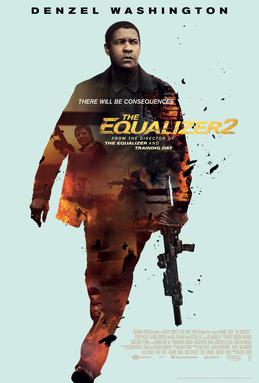 Here we are still in the first week of black history month and this week I have been doing some work on Denzel Washington this week, honestly it was more than timing then anything because his latest movie was just released called The little things which please check out and Justin’s reviews regarding that, then I did a actor profile o him during our podcast episode, as I was doing my research on him I came across something that I never notice before and that out of all his films, he has never done a sequel for except one film. Out of 49 films that he has been only one had a sequel in it and that film was none other than this film. With that being said you would have to guess that this film had to be a success if Washington only pick this role to come back to. The first film was released in 2014 and 7 months before that release Sony had already greenlighted a sequel. The film had a 73 million dollar budget but than grossed 192 million so Sony made the right choice, this film was released four years after the film. The budget was pretty much just a few more million dollars and basically grossed the same amount as the first film making it another hit under Washington’s belt. Washington wasn’t the only star in this film others return as well such as Melissa Leo and Bill Pullman but than you had the newcomer Pedro Pascal as well, Now did this film live up to the previous film?

The film starts with McCall (Washington) on a train traveling to Istanbul, basically he is on a mission to rescue a girl that was taken from her mother but the guy is her father nevertheless he completes his mission and returns the girl back to her mom though it appears her mom doesn’t realize this. At the same time Susan and McCall’s former partner Dave York investigates a murder. When Susan returns to her hotel she is then attacked and killed, After some time Dave is greeted by McCall who is shocked to see him since McCall faked his own death. McCall shares information to Dave that he has found and soon after that McCall who works as a Lyft Driver is attacked by assassin who pretends to be an passenger and there McCall learns the truth that Dave is the true one that killed Susan and he opens up on why he did it. McCall sees the rest of his former team is at Dave’s house as well and he tells them he is going to kill them all and the only sad thing is that he only gets to do it once. Never the less McCall keeps his word and in a epic battle kills everyone, including Dave and film ends With McCall returning to his old house.

I did enjoy this film and I did ask in the beginning of this blog if it lived up to the first film. I have to say yes it but it didn’t improve anything, we basically got the same thing and doing it twice is very risky. Don’t get me wrong Washington was great and Pedro carried his weight. The action was on par as the first however the story was lacking. The plot tries be something better than what it really was. The movie seemed like it was leading to bigger things but never did. In the end I am giving it a good B plus for a grade.