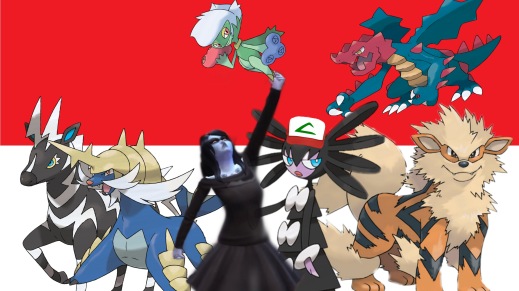 Despite the slight break. Was actually looking forward to getting back to it and play Pokemon Black 2 after how much fun I had with Pokemon Black and was looking forward to returning to Unova. Having a quick peak at the pokedex and changed up my rules just a little bit. Be a little more relaxed in building my team. Not try to be stringent on what gen they come from. With that said, time for Mui to shake off the two years of rust and restart her journey in Aspertria.

Journey began like all journeys do, Mom getting a call from Juniper about sending Bianca to deliver the pokedex and starter. After being called selfish cause I said I didn’t want one, off to get my Starter, but ran into the villainous Paulie. Who tags along and we find her on the landing and I pick… Oshawott. Really wanted Snivy, but forced myself to pick someone new and liked Oshawott better then Tepig. We named it Samus, slogging through the tutorials and off we went. Fighting off Team Plasma and made quick work of Cheren. Finally get on my way. Being very careful on who I add to the team, I don’t catch anything till Growlithe popped up in Virbank, named it Jill and after getting her caught up with Samus. We took down Roxie for the second badge. After the painfully slow movie making experience. Took a bit of delight in ramopaging through Team Plasma to get out and finally back to Castelia. Where I immediately got lost before Iris lead me to the Sewer and forced my to partner with Paulie. Getting away without adding anymore to the team and knocked out Burgh with no issues, but Elessa proved to be a brick wall. Couldn’t deal with the Emolga’s Vault Switches. During grinding we added Daisy the Roselia and with some team work. Walked down the runaway victorious. Clay stood no chance and I spent a lot of time in the Poke World Tournament, trying to forget that Paulie’s Motivation is over a stolen Purrlion, before moving on. Thanks to Alessa the Zebstrika we picked up on the way to the tower, Skyla was no problem, but I immediately turned around. Missing an important teammate, Gothita. Psychics are one of my favorite typing and Gothitelle is worth the added grind work. We caught one outside of Nimbassa and Senua joined the team. Helping Bianca with her Research and learned about the mysterious third dragon and told to go ask that of Drayden as well as if he heard anything about the other two… As soon as I can beat him. My team not equipped to deal with Dragons. After some grinding cheesed it by with poisons, but going to need to address it at some point. Not now because, after learning about Kyurem. Zinzolin froze the town. Getting away with the DNA Splicer ad we chase his ship down to Route 21 and back to the Big Chasm once I figured out the pipe puzzle. Ghetsis proving to be a handful, before finally being beaten and off to the league. Where I was still not prepared for Iris in the slightest. Had a Vanillish that I was going to train up, but ran into Druddigon and loved that Play-Doh looking dragon so much, he took the Ice Cream Cones spot and the name, Sheik. The team was set and on a run through that was purely to get some money and Experience. We hit a hot streak that took us all the way to Iris. Chipping it down to Haxorous vs Samus and Senua and Samus delivering the final blow to put us back into the Hall Of Fame. Post game, was spent catching the legendries, spending way to much time in the World Tournament and restring to her office on the Avenue.

While this wasn’t as strong as Pokemon Black, there was a lot of thing to love about this entry. The designs of the gyms were spectacular. The runway for Elessa made me laugh seeing the picture pop on the big screen after winning and walking down with everyone at the end. The rock concert with Roxie and the Koffing mural. Burgh’s Spider-Webbing was gorgeous. Even thing the elevator dragon worked better here for Drayden. Really got me to look forward to each time I went to a new gym, albeit, missed the cannons.

They incorporated Bianca and Cheren back into the story in a thought out way, that suitted their characters in the perfect way. Cheren’s competitive nature would lead him to being a Gym Leader, while Bianca being more of an explorer. Yearning to not only discover her place among the world and life with Pokemon made a good assistant for Juniper and liked the fact I was dealing with her most of the time.

The cherry on the sundae has to be the Poke World Tournament. Such a fun mini game. Could spent all day facing all the gym leaders from the various games. Seeing how the brackets would turn out and hope you got the coverage. Misty’s Starmie really becoming the vain of my existence but just wanted to play again to try and get another win.

On the negative side, Team Plasma suffered without N. He was an intriguing villain that incorporated the elite four and its social standing. Ghetsis was just to paint by the numbers to care about and even as I am typing this, I can’t get over how mind numbingly dumb ” Paulie’s” motivation is here. I gave Platinum shade over the friend being a nuissance, but here was so much worse. His motivation is his sister’s Purrloin being stolen five years earlier when he was to small to do anything and he is trying to find it. None of this works First off it is a Purrloin. They are everywhere, I get the idea of pokemon being special individual but it is literally the Pokemon Bianca teaches you how to catch Pokemon with. At least make it a Meowth or something different to make it special. The Shadow Triad who has it isn’t even the only one Team Plasma has and not Memorable enough to remember. Not to mention he doesn’t even take in the fact that it had plenty of time to evolve after five years and all. Just a bad and his screams Feel my rage made me hate teaming with him.

At the end of it all though. Still had a great time playing Black 2. Unova has been a genuine treat. Difficulty scale felt smooth. Able to keep your party balanced and wild pokemon string enough to grind efficiently off of. The designs were nice and can’t say enough good things about it. Grade – A+