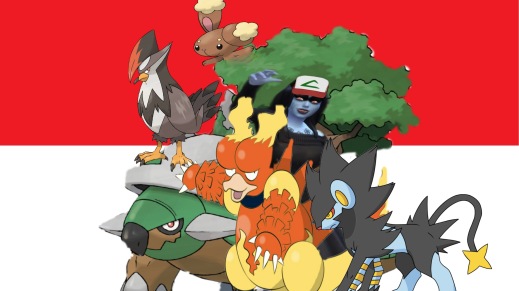 After having a blast playing my way through Pokémon Ruby. Went into Platinum with a bit more enthusiasm. Unlike Ruby, I had no idea what to expect going into the fourth generation and wanted to keep it that way. Which was sort of a mistake since my next self-imposed rule of trying to use new pokemon as much as possible and away from what I just used in Ruby and none from Generation 1. As you saw from the thumbnail though, that rule fell apart. With that said, time for Mui to depart the cave and begin a new journey. Lets dive in shall we.

We had to make two important questions this time. Having to name the rival (I refuse to call him friend no matter how much they try to push it) and I named him, Paulie, cause he is the enemy and then we get to pick our starter, after managing to get Paulie out of the house. It was a little difficult this time around. Kid of liking all three. Eliminating Chimchar since I picked Torchic. Came real close to Pinplup, but choose Turtwig named Pamela. A move I would regret later, but off we went. Trudging slowly through tutorials, but managing to catch Roxy the Starly and Electro The Shinx. Making my way through the tutorials in Jubilife and glad to see things open up after getting the Poketech, but things stopped for a vastly different reason in Eterna Forest. First, I really liked the team up missions. Different spin on things and any time they shake up the game play, I am always up for, but I also added two more Pokemon. Buneary named Harley, and a Ghastly named Trickster. My rules say I can’t have him on my team, but had to evolve him to the Best Boy, Haunter. My favorite Pokemon of all time and had to have one at least in my PC. So, took a bit of time and when he evolved, with a heavy heart, put him in the PC and continued on. Had already met Team Galactic, but thought so little of them, due to how Rowan treated them early on, but they were quick to grow on me. Their Grunts were insane, running around with explosives and while they were cheesy. Right kind of cheesy to hook me in. Loved encountering Mars, Saturn and Jupiter and was pretty much running through everything to keep going with their storyline and wanting to see how it ended, and loved the finale. The Distortion world was great and Cyrus was a tough battle. I used the Master Ball on Giratina and named it Spectre. With Team Galactic behind me though, was kind of sad to carry on with the Gym Leaders because the mistakes I made were beginning to catch up to me.

I had some real issues with Bryon and Candice and while Volkner and Victory Road were a non issue. The league was a different story and Unlike before it was more than a leveling issue. My team was not balanced well at all. Even with Giratina taking hits to heal, barely making it past Aaron. Bertha was easy enough with Lopunny rocking Grass Knot, but Flint was devasting since I didn’t have a water type and when I did manage to get by him, Lucian finished me off fast. I needed a new strategy. So, I turned my attention to collecting the three Mythical pokemon, Uxie, Mesprit, and Azelf and training up a fire pokemon and well, was going to make the painful transformation of Magmar to Magmortar, but thankfully couldn’t due to the trade stipulation, but Magmar was needed for Aaron Than added Uxie for its Yawn move. After some time up at Snowpoint, was ready to go. With Magmar sweeping Aaron, Lopunny hossing her way through Bertha, and Torterra Earthquaking through Flint with Starraptor and Luxray assisting. The team working together on Lucian. It was on to the wall known as Cynthia. Lost counting on the number of times Garchomp destroyed my team. Had nothing to slow it down and had to pull out a ton of tricks. Uxie yawn to put it to sleep. Torterra used Leech Seed and managed to widdle it down enough before dying, and Lopunny finally put it down. Magmar put her final Pokemon, Roserade down and we became the Pokemon Champion. Had a great time in the post game. A ton more places to journey through and more pokemon to seek out, but after all the extra grinding and Cynthia. Did just enough to stop Team Galactic one last time and retired to the Villa, with Haunter in place of Uxie.

Platinum was a game of steep ups and downs. I hated the rival/friend. Mostly because he didn’t feel like either. Just annoy sight to constantly run into and other characters constantly telling me how nice our friendship got old. The gyms ascetics were nice. Like the clock in the garden and the gym setting, but none of the leaders were memorable, except for maybe Crasher Wake due to the mask but none of them were exceptionally interesting to interact or battle. I only had an issue cause I didn’t do a good job building my team. Torterra being strong, but would be destroyed with ice, fire, dragon, or aerial. Pinplup really should have been my choice. The overreliance on older Generation Pokemon as well. If you didn’t pick Chimchar you would need a generation 1 or 2 Pokemon. Unless you had traded for Magmortar, who is as drastic downgrade on Magmar, I don’t care about stats, Magmar is awesome in my opinion. Same with Electabuzz for that matter.

With that said, the pros easily out do the negatives. To have a powerhouse such as Cynthia be your final obstacle was great, because she was a champion. Her team were unbelievably tough and required thought to overcome and just a joy to deal with. Team Galactic stole the show. Building off Team Magma using Pokemon to change the Earth. Cyrus just upped the game by rewriting everything. As B-Movie story arch as it might be, was great fun to go against. So much Pokemon and Sinnoh Lore. Then you get to the Distortion World which really built up the whole adventure to a whole other level and made the finale with Cyrus feel special.

While Platinum may not be as good as Ruby was, still had a fun time and glad I finally played. Final Grade – B+

Thank You for Reading.