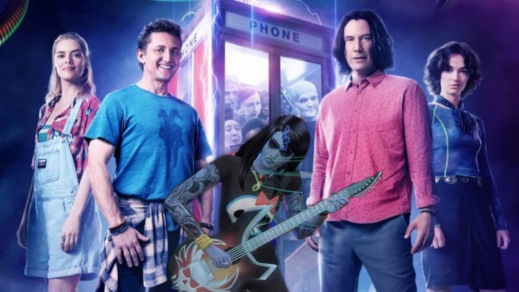 This was one of the movies I was rather looking forward to seeing going into this year. The Bill and Ted movies were always good fun movies to kick back with and just enjoy yourself and had some high hopes for Face The Music. Didn’t think they would come back for anything less than a good script. Certainly been a trip to get to this point but now that it finally here. Let’s dive in and see if it was worth the wait.

The movie starts with a voice over from Thea and Billie. Explaining what had transpired since we last seen their dads, Bill and Ted. That they thought they had written the song to unite the universe, but that wasn’t it and they had been beating themselves up and sinking the band lower and lower in the process. Finally joining them at Missy’s new wedding. Performing their next song that they hope is the song, but it most definitely is not. The only two who do like it are Billie and Thea, who are nearly a carbon copy of their Dads. Getting lectured by Ted’s Dad about how they need to grow up and how they have ruined the girls by being how they are. We jump to Bill and Joanna going to marriage counseling and wildly disappointed to see Ted sighed him and Elizabeth up for the exact same session. Trying desperately to get one of them to say I love you, instead of we and end up sending them away. Going back home and after a conversation with their Daughters. Ted confesses to having got an offer for the Les Paul. Tired of hitting their heads off the wall over it and hurting those around them. Just about to give up when a Time Traveling pod arrives and out comes Kelly, Rufus’s Daughter. Who says they have a problem and they need to come with her. Taking them back to meet with the leaders. Passing a Phone Booth with a hologram of Rufus along the way. They discover that if they don’t perform the song at 7:17 reality would collapse in on itself and the affects are already happening with historical figures being displaced across time. In a panic, they take the Phone Booth to go into the future and steal the song from their future selves. When they had already written it. Only when they jump ahead two years. They find their future is not bright and they not only don’t have the song, but have lost Joanna and Elizabeth and the kids. Meanwhile the Great Leader reveals that the song is only one interpretation of the destiny. Another is Ted and Bill dying. So she sends a robot names Dennis to go kill them. Trying to get ahead of it, Kelly goes back to the present to warn them, and is stopped by Billie and Thea who saw them leaving before and want to use the time machine to go back in time to collect the most famous musicians in history for the band their Dad’s will need to perform their song and this is where I will leave off for the time being.

The story was simple, let elegantly woven together. Everyone having something to do and coming together nicely at the end. From Billie and Thea’s trip through time that was so well put together and performed that I could have easily watched more from them alone. Had the killer robot lurking around every bend. The wives dropping in and out of the timeline and of course, Bill and Ted’s adventure which was hysterical. Getting to arguments with every iteration of themselves. Taking them all the way to the end, with a detour into hell along the way.

The pacing was perfect. Moving at a rather quick pace to show how little time they have. Only slowing down to show importance of a moment which helped heighten the moment all that much more. The characters all felt real to who they were. Bill and Ted were two guys who are trying their best to do right by everyone and two daughters trying to help their Dads. There was no fighting to pad out the run time and it benefits largely from it. The jokes hit for the most part and was still able to pull out a twist at the end and a large part has to do with the cast.

Keanu Reeves did a great job stepping back into the role of Ted after all this time was amazing. Along with Alex Winter returning to play Bill. These two just have great chemistry together. Samara Weaving and Brigette Lundy-Paine were brilliant as Thea and Billie though. They were so good playing as spaced out as Bill and Ted, but when they talk you can hear how smart they are. Especially when Billie is talking to Curdi about what is happening to reality. Able to play off one another so well. Thrilled that we got to spend so much time with them and if they come out and wanted to do a movie around these two; I would be all for it. Kristen Schaal was good as Kelly and always great to see William Sadler as Death and can’t forget Anthony Carrigan’s Dennis Caleb McCoy. Didn’t expect the robot to be as funny as he turned out to be and glad he got to dance at the end.

When I started typing this out, was going to talk about the ending, but I don’t want to ruin it for anyone who decided to click on this without seeing it. If you haven’t seen it, you should go and check it out. Either at the theater or on VOD like I did. Especially if you are a fan of the serious. It was a fun ride with a great way to bring the series to a close. Final Grade = A +