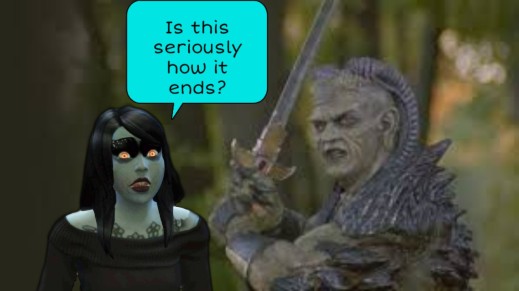 I almost didn’t watch this. After the last movie. Had no real reason to believe it would get any better here. Unfortunately, would have bothered me if I didn’t actually watch it and since I begrudgingly did. Might as well do the review and polish off the run. We started off with a interesting taking on a really good, smooth talking, intimidating monster in the form of a Djinn. A creature who killed and maimed using the victims own deepest desires. A monster badly diluted in the third. How did they fair in the finale. Lets dive in and check it out.

We start off with the quote from the first movie, that is still missing a part at the end. Then we are with a young couple riding a bike up to a fixer-upper home. Loving couple who immediately go up to the room and break the bed and then draws her in a provocative position before they leave and we jump ahead three years. Seeing her, Lisa, going to a friend and lawyer, Steven. Who is working on a settlement for them after some incident. He gives her a metal box and drops it when he tries to kiss her. Cause he has been so good throughout this and doesn’t like the way Sam treats her. When she looks down she sees the Red Opal. After brief contact with the stone to give it back to him. Getting a glimpse of the monster inside. Giving it back to him and after agreeing to get it appraised he locks it in the safe and she leaves. We see her going home and the bike is in ruin and Sam is in a wheelchair. Drinking, angry man who is looking up porn online. While back at the lawyers, the Djinn wakes up. Once again, using the waker term because that wasn’t irritating enough in the third movie. Taking the identity of Sam and goes about attempting to complete the prophecy and Lisa starts firing them off, since she only ever sees Sam. Doesn’t know who he is and just starts wishing. That the case could be settled, so her and her boyfriend can work on their relationship. Which only results in another argument over sex. Than wishes he could walk. Thinking it would make him calm down. Which results in another argument because he thinks she is sleeping with Sam during the dinner and storms off to the strip club. She goes to Steven and there, she makes another wish, that he would love her for who she really is. He can’t grant it because of free will and sets out to try and find out how to make her love him, fulfilling that wish. Which going by every conversation in this movie, is by having sex with her. While a hunter has been sent to kill the waker.

Okay, the positives, the gore was actually pretty good throughout. The best being the opposing lawyer who was being made to cut parts off himself and I think that may have been it. There was killer sex, but honestly, that rolls into the negative territory. Luckily, we are done with the positives.

This either written by porn writers who had nothing better to do, or freelancers who only know how to write sex. There is not a meaningful conversation held nearly throughout the entire runtime. Diana and the boyfriend’s issues are because they haven’t had sex. Which her friend tells Steven is the way to make her fall in love. Than the same at the strip club. Meanwhile, Sam is angry because they haven’t had sex in three years, and their one good moment was them having sex and her posing for the picture. They couldn’t be bothered to even try and build any other dynamics. Which should not be hard to do, but they simply fail at.

No own to the wish that created the issue for the Djinn…it doesn’t work. No matter what happens, she is directing the wish to Steven. In his view, that would be the equivalent of someone getting arrested for Identity Fraud and being charged under the name they stole. Plus, it doesn’t matter, we have seen wishes that the Djinn couldn’t grant and they would simply have to wish again. Like Alexandra wishing he was dead and Morgana wishing for no evil in the world. If they wish can’t granted, it becomes negated and all he had to do was get her to wish again.

Now, I know the argument is that this is not the same Djinn and his stone was found in a dime store tin that, despite seeing the lines on the side, had never been opened before, but the problem is they opened with the same quote from the first movie. If you don’t want to draw comparisons don’t start us off with a reminder of a movie that so, so much better than this and it’s a shame that it is tied together by name.

The first two movies are some really good horror movies, with Andrew Divoff giving us a stellar monster in the form of the Djinn and when I think of the series. That will be what I hold dear. Leaving this in the bin with the third. Final Grade = F

As always I hope you enjoy and looking forward to a more positive review next time..