Wishmaster 3: Beyond The Gates Of Hell Movie Review 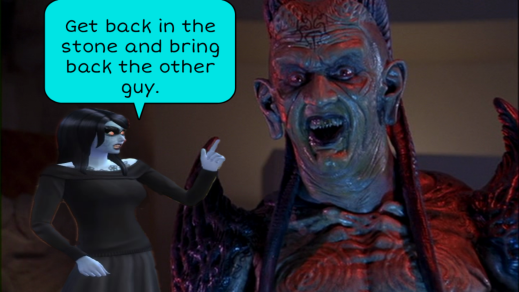 Alright than. So, we bid farewell to Andrew Divoff with Evil Never Dies and march on to Wishmaster 3 Beyond The Gates Of Hell. I knew I would miss him, but willing to see what the new guy has to offer and with his goal being to release his race. Means that there is more than one Djinn and all we are doing is getting a new Djinn which is an interesting prospect… Yeah, I will use my intro to give you a heads up, while I try to be impartial and give both good and bad…this is going to be a lot more negative than I normally give to a movie. Let’s dive in shall we.

We open up with a woman, Diana, having a nightmare of a car flipping over in a nasty accident. She wakes up, but still having flashes of the accident. We see her as a child and getting into an argument with her Mom and her Dad was distracted and missed a down truck and that’s what caused the accident and while he gets her out. When he is trying to get her Mom out though, it explodes. All the while, Diana is climbing up on the roof. Contemplation on her face and they tease it by her boyfriend going up and not being able to find her right away and she scares him. She saying she thought he knew her better and he says you never really know. Romantic moment. The next day, she is meets up with her friend and they talk about her going to grad school and what will her and her boyfriend do and all of that. After class the Professor reminds her of meeting him at the museum at 5:30 which infuriates her boyfriend. Thinking he is losing out to some geek boy professor for reasons I suppose. Jump to 5:30 and she arrives and he isn’t there and she starts without him after only about five minutes go by. Finding a box that she solves after a lengthy amount of time just staring at it and uses a pen to push a button. Finding a fire opal inside. When she wipes it off with a cloth and gets a vision of the monster inside. Inspecting a disturbance and jump scared by the professor, who is proud of her discovery and wants to celebrate with wine and dinner to get to know her. After politely shooting him down, breaking his heart. She leaves and the Djinn and oh no, we are stopping here because just absolutely not.

I get that they couldn’t duplicate what Andrew Divoff did with Nathaniel and would normally applaud them for trying something new, but how could anyone think that this was the right direction to go. You went from a Djinn how was such a smooth, elegant talking monster. Who used charisma to get people to open up to him to someone who said the line,” where is my waker?” Then tried resorting to blackmail the professor for information. This was taking a good, intimidating, force of nature that we got to know in the first two movies and stripping it of everything that made him special, sticking spikes into it’s brain till foam starting coming out of it’s mouth and turned on the cameras.

That isn’t even the only flaw with the it’s a new Djinn though, because they kept the fire stone and the Persia background. So, when you see the Opal you automatically think about Nathaniel who was trapped in the stone by a sorcerer. I.E he was. This one could have been trapped in anything which would have helped at least translate it a little more.  She even found the quote from the first movie in her research.

Now I have to apologies to Evil Never Dies, cause I called that one heavy handed with the god angle. Since the Djinn are not in Catholicism or Christianity and such and would have been better had they worked within the Arabic Roots if they gone that way, but they handled it so much better there than they did here. Diana actually called upon the Arch Angel Micheal  to stop the Djinn. Which caused so many conversations that made me reach for the remote and created the most painful endings.

Alexandra from the first, genuinely felt like she outsmarted The Djinn and pulled out the win. Even Morgana, within the story they were telling, kind of had to use her mind. By bringing back the man she killed, cleansed her soul and allowed her to take the stone and trap him again. This one though…despite the Djinn having the power to protect the one who woke them up, from gunfire when they are not even around. Had to run over and grab Diana to stop her from falling. Which somehow managed to grant her the chance to use Michael’s sword and stab him in the chest. That was it. All she had to do. A stupid which that brought an Arch Angel down who did nothing but throw his sword at a random moment. Didn’t even bother trying to come up with something cleaver or smart. Just sword to the chest and done.

I am not going to trash the make-up and prosthetic to much. It didn’t look good and changing the eye color was an awful choice. The orange and red flicked contacts were the best features. I get them trying to change from Nathaniel, but they used a ton of other things from him. Should have used that too.

I’ll give them this. The heart break wish was good. That was it. The line of pros end their.

This movie should be held as a gleaming example of how not to recast. Andrew Divoff was the pillar of these movies and if they were going to replace him. They needed to do far better than this. Nothing worked her. From the acting, story, characters and the wises, the thing we are hear for, fail due to changing from an charming, charismatic Djinn to a neanderthal one who just white knuckled everyone and made it underwhelming. This movie gets a F and dreading the fourth. Final Grade = F

Sorry about the rant. As always, I hope you enjoyed and…