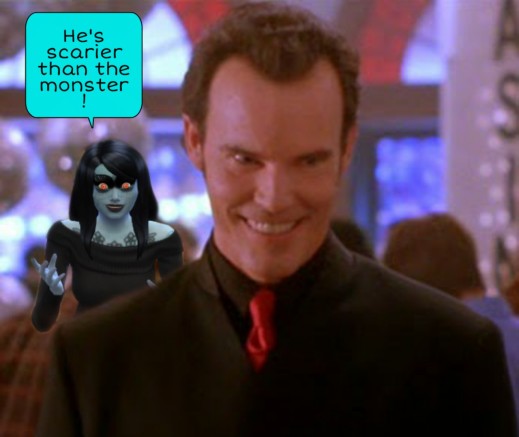 And off we go in our trip through the Wishmaster series, with Wishmaster 2 Evil Never Dies. A straight to video release that came out in 1999, with Andrew Divoff returning as the villainous Djinn and the last of the series that I have seen before. While the first movie remains a favorite of mine. How does the second one hold up and fair to a more impartial viewing? Let’s dive in and discuss shall we.

They start off fast, with a robbery going south at a museum. Sirens start to go off and shootout commences between the guards and the thieves. One of the shots, hits the statue and knocks out the Fire Opal. Morgana picks it up and ends up saving her, when a bullet hits it again. Shattering and beginning to glow. Before they find out why, a guard shows up and shots her boyfriend, Eric. Who tells her to go. While she is escaping, the Djinn comes out, in his slimy serpent form. Asking Eric if he wishes the pain to go away. To which, Eric replies that he wishes he was never born. and immediately begins to shift in reverse from adult to teen to child and eventually nothing. As the Djinn was collecting the stone. A cop shows up, ordering him to freeze and the Djinn froze him. By the time the rest of the cops arrives, he is in his human form and willingly surrenders and takes full responsibility of all the crimes Morgana and Eric committed. While Morgana is having a break down over her lose and killing the guard. ” Nathaniel” is being interrogated and driving the cop insane. Cop not believing his story while The Djinn is trying to get him to slip up and ask for something, till he just sends him to lock up at county. Morgana sees it and only adds to her guilt. While he is in county, he grants one of the prisoner’s wish of walking right out the bars, by him getting flung up against the bars and forcefully shoved between them, in a gruesome sight. While Morgana sees it in her dreams. The next day she goes off to a Catholic Church to meet Father Gregory. Wanting to talk to him about what was happening and he was not really willing to listen, but let her talk. Asking if he believed in the Devil and when he asked what her point was. She tells him about Eric being dead and he more or less shrugs it off. Saying he wasn’t right for her and she storms away after an argument.  Meanwhile, back at a state penitentiary and fulfilling another wish. Telling them to spread the word to their friends. The next morning, she confesses to Gregory and goes to visit Nathaniel, to find out what is going on, and why he confessed and why is he appearing in her dreams and what is the prophecy. He tells her that she’ll learn in time and he is in her only temporarily, needing to collect souls. After catch a glimpse of his true self and panics. Leaving to go find out more about him and what he is collecting souls for before he is finished and comes for her three wishes and will end it there for now.

They really took what made the first movie great doubled down on it. By giving the Djinn the goal of needing a thousand and one souls before he even cares about collecting the three from Morgana, means that we get more Divoff and more wishes. Some being overtly gory and some funny. Most over the top, but wanted so much more just to see how he would twist the conversation to meet his goal. Bringing back the part scene at a casino this time and still works just as well. A bit more CGI affects, but the practical ones were still as much fun as they were in the first.

They changed up the make-up and prosthetic of the Djinn. Losing the armor and cape, for more human body. Face being more shrunken which allowed the horns sticking out of his head and the spiked shoulders stood out more because of this change. Was the same coloring and more slimy but they did a great job and one thing they did keep was his orange and red flicked eyes and that made up for any change. They are just so menacing and make the look that much better for it.

Cast wise, this was very much a one man show, Andrew Divoff just knew this character so well and brought out every nuance and tick and made every second of screen time a blast. He just came across as so unusual and terrifying and when he was even enjoying himself and taunting Morgana and Gregory, it was unsettling and just so well done. In my first review, claimed he was potentially more scary in his human form then he was as the Djinn. This time around, it is absolutely true. He was fantastic and made this such a fun time.

Now, who was awful was Paul Johansson’s character Gregory. Every word out of him is delivered in a flat, near emotionless pitch and so, so repetitively. He offers nothing of substance.  He is not likable throughout and has quite a few… jerk lines and can’t even enjoy his death because he is just that bad of a character and acted.

One final negative and don’t know if its a big one or not was that this had such a shove it down your throat Catholicism story thread that just drags things down. Djinn are more attached to Arab religions. Not against going religious to beat him, but at least go through the ones with them more highlighted in. The first movie really felt like Alexandra pulled the win out of the fire by outsmarting him and this just felt so bland in comparison, because Morgana didn’t really didn’t do anything.

At the end of the day, I am giving it a B. While Morgana and Gregory were more on the bad side. Andrew Divoff pulls this film up several levels on his performance as Nathaniel alone. He was just so, so good. The gore is there and some pretty funny moments throughout. It is not as good as the first, but still fun to be had here. Final Grade = B