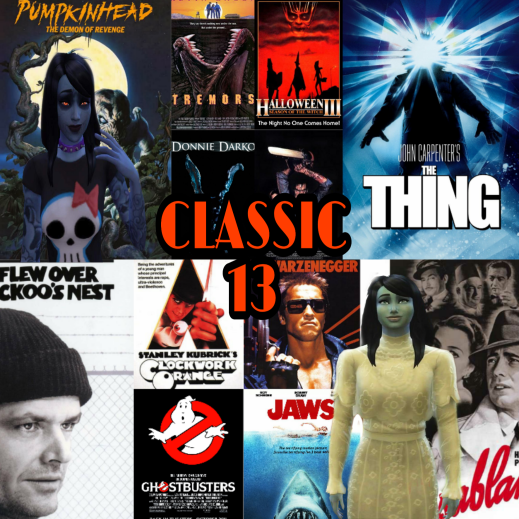 Hello and welcome back to this months Classic 13, with the 3rd installment of the Friday The 13th Series. While this may not be as classic as some, I couldn’t not do a Friday The 13th Movie this time around, and since I did the first and Paul did the second. The third one it is. Besides, an iconic moment does happen here, with not only getting the Hockey Mask, but the crack in it. It’s weird, but always enjoyed the fact the crack carried on for as long as it did. Showing the scars from his prior fights. So, let’s dive in and discuss shall we.

We get the movie started with a recap of what happened in Part 2, with him crawling away after Alice and Paul leaves. Going off and killing two of the locals, before we meet the teens,  and see some of their characteristics. Like Shelly being awkward and trying to gain attention and laughs by scaring them. Chris has a backstory of some sort of trauma. We meet her Boyfriend Rick that she hasn’t seen in some time. Vera is going against her Mother’s demands, Andy and his Girlfriend, and of course, two hippies, cause why not. After yet another prank from Shelly. Vera goes to the store. Taking pity on Shelly at the last minute and takes him along the way. Ending up on the wrong side of a biker gang. When they get back with the damaged car. Rick leaves in some sort of strange anger and Chris goes along. Not spotting the biker gang, who steal the gas, and meets their end at the hands of Jason, and from their, starts the game of Jason laying and wait and will leave it there.

The story was nothing really much to write home about. It was effective enough for what the movie was, but their was one aspect that I really liked, and that was Chris’s backstory. Having escaped Jason’s grasp once in her past, for two reasons. It kind of raises a things a bit. Normally you hear people reference kills that have occured between movies, but this kind of hammers it home that a lot happens between the movies, and liked the fact that he recognizes her and heightens the interactions between them. Particularly when he removes his mask on the rope.

Speaking of Chris, she really makes for a memorable Final Girl. A stand out in a series of top notch Final Girls, but she stands out. What really sold her performance was how fast she was to go for the kill, by hanging him. Most of the time, they hit the killer and walk away, but she goes all in. Knocks him out, gets the rope on him, and hangs him. Showing not just strength to survive, but guts to take the extra steps to make that happen. Dana Kimmell did a stellar job at bringing out the best parts of Chris.

And we got to talk about Shelly. I never knew there was a group of people who don’t like him, and I don’t get why. He is kind of relatable to a lot of people. His low self-esteem and his desire to be accepted, but doesn’t know how to be and so he goes with the one thing he knows, which is also the one thing that makes everyone angry and makes things worse for a guy who just wants to be accepted. Deep down he is a good guy and sad to see him go and we all owe him a debt of gratitude for Jason’s Hockey mask.

This Jason is brought to us by the talented Richard Brooker. As a human Jason, he didn’t get the privilege of being able to tank everything thrown at him, but got a lot out of him all the same. He had the size to be intimidating and held himself in the right way when he was simply walking around. When he was hurt, he didn’t oversell to much, but as it went on. Can see it was all taking a toll, but was driven by the need to kill, and still laugh when the mask comes off at the end. He may not be my favorite, but Brooker’s take on the roll is high up there.

Some may be put off due to the 3-D, but was still fun to watch the likes of an eyeball popping out of Rick’s head and various pitch fork kills. You had one of the best kills when he cut Andy in half when he was walking around on his hands, and the kill from beneath the hammock. Plus, a projectile kill to the eye. Friday the 13th is known for great kills and part 3 is a great example as to why that is, and Higgin’s Haven is one of my favorite locations they used. If I sat down and thought on it, may actually be my favorite, but story for another time.

This is far from perfect though. They could have done a few things much better. They could have made the biker gang a little more viscous. Liked the fact that they were used to explain why Chris couldn’t simply drive away, but if they come across looking stronger and Jason takes them out. He looks stronger than in the process and Fox was a great character and would have liked to see her make it that much further. My next gripe is with Rick himself, and the fact his mood seems to swing at a moments notice, and don’t know why. We need someone to despise and wonder what colorful way Jason will kill him, but we have the biker gang for that. All Rick does is come off as annoying and that doesn’t serve any good. Than there is the end. The jumpscare with Pamela just doesn’t work, and I hate when the final girl goes crazy at the end. Always feels like I rooted her on for nothing and no, the argument that it would happen to anyone in this situation would experience the same thing, does not work because this is not real.

And that brings us to the end. Despite the complaints. The pros far outweigh the negatives. Part 3 is just as fun to watch today as it was when I first watched it as a kid. Brutal kills, a strong final girl, and Richard Brooker. All makes for a great watch on this, Friday The 13th.

As always, hope you enjoyed and..