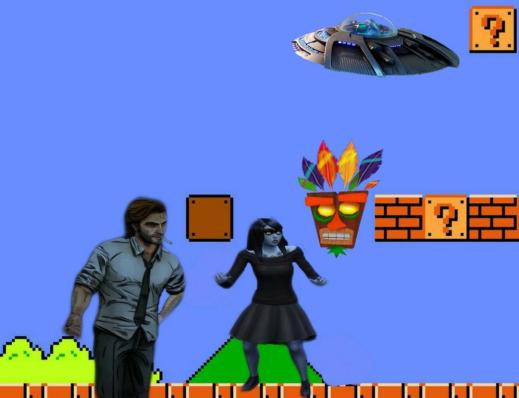 I have a very exciting few weeks ahead. Starting things off with Castlevania Season 3 dropping today. Along with Doom Eternal dropping on the 20th, than free play of Predator Hunting Ground starting March 27th, and then you get Resident Evil 3 on April 3rd. It goes without saying, So, the gamer in me is chewing at the bits. Talking to some friends about games they like and so forth. Got me thinking about the characters I hold dear and decided to come up with my favorite seven. Will this be the same as yours? Absolutely not. We all have our own favorites and own personal memories surrounding them. This is for fun. Maybe you see a name that brings back memories of playing their game, or if you haven’t played them. Give you reason, and mostly, to give you a reason to think up your own names and the fun times you had playing Video Games. With that said, one rule as always, have to have played the game in order for the character to have made the list. There are going to be few heavy hitters missing from the list. Chances are, missed out on their games and just haven’t gone back to play them and don’t like to talk about things that I don’t know about. Okay? Good, lets jump in shall we.

7. Mario – Super Mario Bros. and so much more

I am Thirty years old. By the time I was old enough to play Video Games, found myself pulled to the 2-D World of Super Mario Bros. A game of simplicity. Start the level and get to the end, and repeat. Could play it to try and get everything or get to the end the fastest, and repeat. As time went on and you enter the beautiful and thrilling world that was Mario 64 and the days lost to Mario Kart, the Game Boy Games, Tennis, Baseball, The Parties, and the glorious chaos that is Smash Bros. Mario may have dropped down the list since I was little, but will always hold the Italian Plumber close to my heart.

A little out there, I know, but there is something about the foul mouthed, grey alien that makes me laugh. How over the top he is and how outrageous they get throughout the series. He was a likeable Anti-Hero. You did awful things to people and cheered him on the entire way. From him touching down in the farm the first time to all the way back to his homeworld. Had a blast going through his journey and impatiently waiting for the remake.

Okay, if we were factoring in gameplay and technical aspect A Wolf Among Us would fall drastically. Being less game and more, please just go here so we can continue the cut scene kind of game, but I am looking at the character and Bigby Wolf made himself a character that I enjoyed so much. Strived hard to get him the best possible outcome, minus destroying George’s bar, he had it coming. Bigby was a flawed character, who was trying his best to overcome what he did and try and turn over a new leaf and be the guy who saved those he once tormented, and his plight got me to plow through the lackluster mechanics and look forward to the sequel to come.

Doom is one of my favorite game series I have ever played. The non-stop action of just wave after wave of demons and monsters to simply plow your way through with glee, and while little is known of the Almighty Doom Slayer, the idea of jumping into his world, armed with a plethora of guns and explosives and glory kills and chainsaws always brings a smile to my face, and what more can I say. He is just a blast and can’t wait for the 20th.

Her voices drove me crazy. Actually found myself yelling back at them myself when I got stuck on a puzzle and they kept telling me I was lost. Loved the story of her finding happiness in her love Dillion. How he made her strive to be better and her trek into Helheim to save his soul from Hela. A warrior at heart who fights and claws her way to victory and kept me invested and couldn’t stop until I found out how her journey concluded, and still geek out over the Senua Saga Trailer, and all of it is just how strong of a character she is.

When I made this list, knew someone from the prestigious Resident Evil Universe was going to make it. Have loved all the games, yes even the sixth one, and while Leon S. Kennedy came close. Claire has always been my favorite of the pact and it’s because she has always seemed to be over her head. She is not a trained special ops. Nor is she a rookie cop, but just a person, in search of her Brother. Who, through a series of events becomes something greater. She saves Sherry and then becomes something much more than where she started, and we got to see the start of her journey and grow along the way. From Resident Evil 2 to even the movie, Resident Evil: Degeneration. Any time they bring out Claire. Know it’s going to be good.

There has never been a character that has made me blindingly angry and thrilled in a bat of an eye, the way the insane bandicoot has made me. The only game, whether it be the original or remake, that had made me want to throw the controller through the Television on a regular basis, but I couldn’t because then I wouldn’t be able to get the gems and save his lady bandicoot friend, and I had to get the full ending. Not just beat Cortex. I love everything about Crash. His designs and little dances. The vacant look in his eyes, and the fact that no matter how much he made me want to waste all his lives hurling him off the edge, because he won’t stick the landing when I need him to! Yet, I didn’t because I wanted to see his dance of victory and the fact that he can get those extreme mood swings out of me. Shows how strong of a character he is and deserving of the crown.

Like I said at the start. Not expecting people to agree with my list. It’s a personal one and we all have our favorites, and would love to hear yours. All I can hope, is that you enjoyed the list and as always…