Going into Crawl, didn’t have much expectations. I love Animal style creature films. From the good ones, like Jaws, Lake Placid and…. Piranha. To the dumb such as Sharktapus, Python, and Piranha. So, went in pretty open minded. Expecting a good, fun movie, but not in the league of Jaws, but wow. This was so much better then anything I expected, and carving itself out as one of the best I have seen.

Starting with the story. Yes, it has one and is pretty solid and grounded one at that. Staring with Haley, a college sw 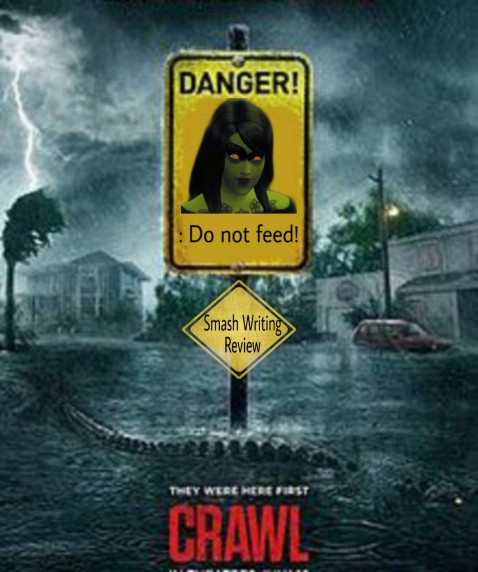 immer, who is seen losing a swim race, by a fraction of a second, and seems to be held back by some emotional issue going on in her personal life. After a phone call from her older sister, she sets off to make sure her Dad, who was in the wake of a Category 5 Hurricane. Journey takes her through a police barricade, and down to her childhood home. Finding her Dad unconscious, with a broken leg, and slashed up torso. Before she can get him out, is chased back by our first Alligator, and the movie never really lets down from there.

Kaya Scodelario (Haley) and Barry Pepper (Dave) were your two main characters and the only ones you really deal with throughout. The rest were pretty much there to be eaten, and they were both so perfect for their roles. Haley was just the perfect survivor. So many times you are holding your breath. Worried over how she was going to get out of their grasp each time they get a hold of her. Cause each time is worse then the last. Building in suspense and rooting on her ultimate triumph when the Gator gets her in the Death Roll. Then you got Father of the Century, who at first you are just waiting for him to die, but through his relationship with Haley and just the upmost love and belief he has in her, you begin to pull for just as hard as Haley, and he takes a beating. By the end you are wondering how he isn’t dead, but are glad he is not because his presences adds to how much of a champ Haley looks in the final shot. An ending I didn’t see coming for the genre we are in, but enjoyed it tremendously for being different and choosing to end the story instead of something more ridiculous that we normally get.

The atmosphere, pacing, sound, and settings were perfect. Being in the North, never had to deal with a Hurricane, but the rain and wind sounds all seemed point on. The dark, dank and slow closing claustrophobia from the flooding crawl space. That follows them up through the house to the top of the roof. They never feel safe and always wondering when the next attack will come, because they pace out the attacks so well. Withholding the first attack for a good while. Setting up the trap, before getting the ball rolling and even when you are well into the story. They pull back, pull back, and then get you with a shock attack. Gives Kaya and Barry time to build their characters and build the tension to a boiling point and then give you another alligator attack.

Even the alligators were pretty spot on. The were CGI and used to build their bulk and shimmering eyes, but their movements were kind of true to how they are in the wild. How they grab and pull their victims off, or they grab and start to roll and rip off shred of their prey. Using their hunting techniques to add and work the story around, which was a nice touch. Exaggerated at times, but nice all the same.

I don’t have anything negative to say about this movie. Would be reaching if I did, and not prevalent enough to even take me out of my immersion. This was a fun, creature blood bath, grounded with a heart and relatable story between a young woman trying to wrap her mind about what is happening in her own life and gain a little confidence in herself along the way. Please go and see this, it’s truly a must watch. Giving it a high A-Rating and may end up going to see it again myself. True hidden gem in a year that has given us quite a few excellent movies.